There's a new series of books for kids 5 and up in town - they're going to love them!
Trachanoids
Defenders of the Earth by James J Fitl
ISBN: 9780982582534
Paperback: $8.95
Awards: Next Generation Indie Book Award
About the book:

Prehistoric Earth is in great peril. A fierce race of aliens from a distant galaxy has found its way to the planet, transported by a massive fleet of advanced-technology spacecraft, and armed with state-of-the-art artillery. Is this the end for humans and dinosaurs?
Standing in the way of the extraterrestrial invaders, however, are seven courageous dinosaurs who discover a mysterious, powerful medallion that grants them incredible powers.
They are The Trachanoids.


Boasting of powers beyond their wildest imagination, The Trachanoids unite in a quest to defend the Earth from its alien conquerors — no matter what the cost.

My Thoughts:
The Trachanoids are a new kind of hero for kids 5+. With the opening of the book you see selfish, "me" oriented dinosaurs - more intent on serving themselves and being demanding and angry toward others. By the end of the book the dinosaurs and the humans on Earth have learned to work together and help rid the earth of the Mugo - alien 1/2 wolf 1/2 crocodile creatures who spend their time attacking and taking over other worlds.

The book is a great introduction to science fiction for kids and a fun way for them to learn character and the importance of working together. Well written, entertaining and fast paced - you'll see your kid's imagination get moving when you read this book. 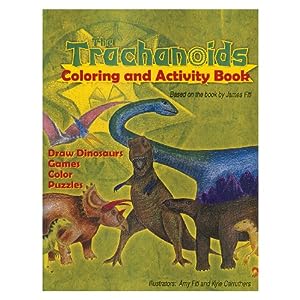 This book comes 2 ways:
One as a hard bound book complete with color pictures and the other is a small chapter book of 64 pages with black and white pictures. Personally I thought the hard back was rather hard to read and it was very wordy with tiny print for younger children who are being read to. The pictures in the book are wonderful though and kids will enjoy looking at the pictures. I thought the chapter book was ideal for kids 6+ whether they are being read to or doing the reading themselves. The text is large which is great for beginning readers who are able to read fairly well on their own and reluctant readers should enjoy reading this also with the fast paced, action packed movement of the story.


Written by storyteller James J Fitl and illustrated by his wife Amy, The Trachanoids is a family collaboration including their daughter's suggestions and ideas. The idea for The Trachanoids has been in the back of James's mind since he was a child and it wasn't until he began sharing the story with his daughter in 2007 that it started being refined and ready for sharing. Learn more here

$13.99 (Set) $4.50 (Activity Book only)
Discover the super-powered dinosaurs, The Trachanoids, and their alien nemesis, the Mugo, with this awesome trading card game and activity pack. Be a part of the action -- power up and unite to defeat the Mugo and their high-tech machines in The Trachanoids Battle For Earth Trading Card Game. This fun pack also includes directions on how to draw the dinosaurs in the book The Trachnoids: Defenders of the Earth. The kit also includes fun activities such as coloring pages, word games, and puzzles, all while learning about dinosaurs!

The Dinosaur Backpack Buddie is great for kids as young as 3 or 4. The backpack is adorable and when you fold it out it becomes a playmat and includes 7 dinosaurs to play with. Fold it up and your kid can carry it on their back and take it with them to church, to the doctor to play with while waiting for his name to be called, to a friends house, etc. This will fast become a favorite toy & would be a perfect stocking stuffer & birthday present idea. The Backpack Buddie is available in Artfire for $25.00.


Trachanoids Dinosaurs Vs. Aliens playset comes with seven plastic dinosaurs and a set of alien and human Paper Cutz to set up scenes and play with.

There are also T-shirts and hats on the website! On the website you can also find printable color pages, activities and online games as well as an educators page. At this time the Dinosaur Backpack Buddie and the dinosaurs aren't available individually or on the website - you can order them through

Giveaway: Amy & James are kicking off their Blog Review Debut on Classic Children's Books & are very generously offering 4 prizes! Your kids will love these & they're perfect for stocking stuffers!